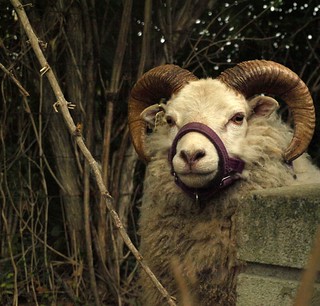 It just occurred to me that I don’t think I ever introduced this year’s stud ram on the blog. Like in past years we rented a ram from Rare Find Farm in North Carolina (the farm we bought our original ewes from). This year’s fellow is named Icon and he is pure white with fine, tight crimpy wool. White sheep are interesting when it comes to breeding because “white” isn’t actually a color, its a pattern. Its as if they are a colored sheep but covered in a giant white spot. So even though you can’t see it, they carry the genes for a particular color, and separate genes for their white patterning. This means that they are still contributing to the color genetics of the lambs, you just don’t know how. If you look at Icon’s pedigree you’ll see that his parents were Mioget and White. Tracing that white mother back through the pedigree she has black/gray on one side but the other side but lots of white on the other side. So basically there is no telling what color genes Icon will be passing on to his lambs. His lambs with other ewes have been mostly Moorit (brown) out of fawn or musket (light tan) mothers. We select our rams based on fleece quality rather than color since at this point we are mostly interested in increasing the softness and single-coatedness of our fleeces rather than trying for a specific color. Next year I may try to bring in a ram with strong black or grey genetics to see if we can get some shades of grey in the flock to go along with all the shades of brown we already have.

2 thoughts on “This Year’s Stud”