WARNING: this post has lots of pictures and discussion of sheep penises.So if you have delicate sensibilities, stop reading.

Yesterday Logan was acting a little off- not hanging out with the flock as much as usual, laying down a bit more than normal but I didn’t really think much of it. When we woke up this morning, though, he was much worse: laying flat on the ground and not making any effort to follow the flock when they went into the barn or the other pasture. 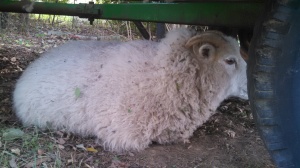 My first thought was bloat because its something that sheep are prone to and I did just move the sheep onto fresh pasture. Usually bloat only happens if you suddenly move them onto a really lush new pasture in the spring, not just onto a slightly less dead pasture in November. Just in case, I gave him baking soda, oil and gas-ex and massaged his rumen and made him walk around. No improvement. Over the day, he continued to get worse, becoming more reluctant to stand up and move even if I pushed on him. No signs of him eating (though he would drink if I put a cup of molasses water near his mouth), pooping or peeing. A bit of diarrhea on his bottom but nothing fresh. Normal temp. I consulted our vet over the phone and he said that it didn’t sound like bloat since there wasn’t any distention on the left side (where the rumen is located) or frothing at the mouth. And while its possible that he ate something toxic the vet pointed out that its unlikely that only one member of the flock would have gotten sick from something they were all exposed to. But he had no idea what the problem could be and didn’t sound optimistic about being able to find out with a farm visit so we decided to wait and keep an eye on him and see if there were any changes.

If the rumen is inactive due to bloat, it can help to stand the sheep up on their back legs and massage their rumens so I decided to give this a try. While I was rubbing his belly I noticed that his penis looked weird. Well, weirder than usual. You see, sheep penises (called “pizzles” for some reason) are bizarre. No one tells you this, and then you have to do a google image search of “sheep penis” in an effort to figure out what they are supposed to look like. Well apparently they are supposed to look like they have worms sticking out the end. I haven’t ever seen a healthy, erect sheep penis before. I only have little baby boys (and whethers, at that) and you only see the little worm bit sticking out if they are erect so, well, this was all very new to me. From what I’ve gleaned from my extensive google searching, the worm bit  1) shouldn’t stick out all the time  b) should be pink and c) is called the “urethral process”.

So why does Logan have an erect, dark brown urethral process with a little gold sphere at the end? 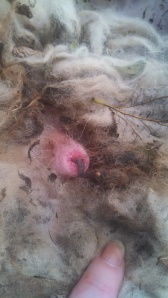 This doesn’t look right to me, but then….even a healthy sheep penis seems like it would look bizarre. At least judging from that sketch which is the ONLY image of a non-diseased sheep penis I could find online. So I did what modern farmer would do and posted the picture ton my sheep & goat health groups on Facebook. Unfortunately the only responses I got were suggestions on manscaping my poor boy.   Now night has fallen and the poor little guy has been down and in pain all day and I’m running out of ideas. So I go out and start feeling around his abdomen to see if I can identify any swelling, lumps, cysts or other abnormalities. I really didn’t know what I was looking for but I felt like I should do “something”. I gently press on the urethral process and suddenly….

the round gold bit at the end came plopping out followed by a dribble of bloody urine. Some more urine came out as well, but just a dribble, not a rush. Once I retrieved my flashlight, which I had tossed in the air when the pizzle popped, I rexamined the area. There was a small bit of bloody mucus in the wool and the urethral process is no longer sticking out where I can see it.   My theory now is that Logan had a urinary stone which was preventing him from peeing, causing his urine to back up in his bladder and kidneys and causing him a lot of pain. Hopefully his kidneys haven’t been damaged beyond repair, or else he could still die from kidney failure. Its also possible that he has more than one blockage so I’ll continue to keep an eye on him. Hopefully he will be able to empty his bladder soon and will start feeling better soon. Now I need to research as much as I can about urinary calculi…

Update: its been a couple of hours and he isn’t improving. He is still laying collapsed on the ground and trembling when I touch his sides and abdomen. I’m concerned that he may already have organ damage and if that is the case then there isn’t anything we can do.