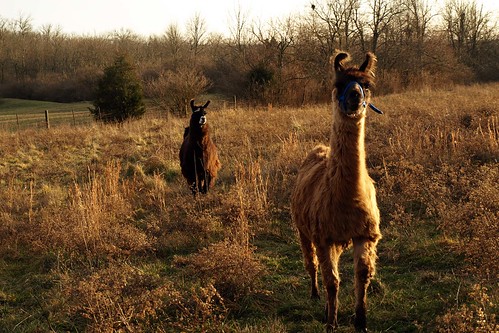 We have two llamas on the farm. Their primary job is to guard the flock from predators- specifically coyotes and rogue dogs. We hear coyotes at night and our neighbors have reported seeing them in their fields but we have been lucky so far and have never spotted on in our pasture. That may be because the smell of the llamas naturally keeps them away. If one ever does venture into the pasture, the llamas have a strong instinct to herd the flock somewhere safe (the barn), make a bunch of noise and kick anything that gets too close. They may look cartoonish from a distance but they are actually very large and strong with a fierce kick.

Their second “job” is to produce fiber. Since we originally got them as guardians, and since they were rescues, we didn’t know what to expect from their fleeces. Turns out they both produce beautiful, soft fiber. Grace, the red head, is a suri llama and Cindy is a more typical huacaya llama.

Our girls are both rescues from S.E.L.R. We don’t know all of the details about their pasts, but they were both neglected and Grace was barely more than skin and bones when we got her. Over the one and a half years we’ve had them they have both gotten to a healthy weight and while they still don’t like being touched they are no longer terrified of people– as long as you move slowly and don’t meet their eyes!

Update: After spending a few years as a foster on our farm, Cindy was adopted and is now happily living on her forever-farm!