Chris built, and re-built several times, a chicken run so that the chicks can safely spend time outside of their enclosure in the barn. It had to be re-done several times because the goats kept destroying it. As of this evening I’ve discovered a new hole in the chicken wire at pig-level. I wish we could just let the chickens roam free but we have foxes in the area. 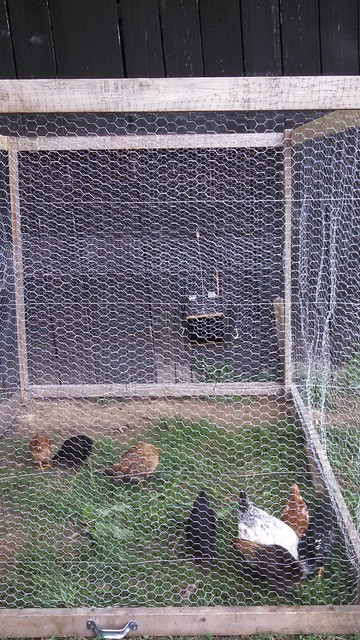 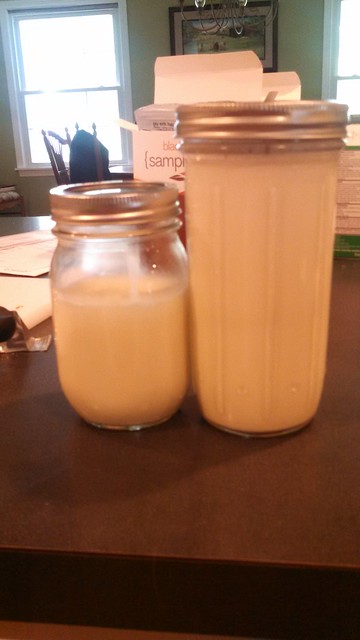 Most of the milk is going straight into the freezer to be saved for future cheese making. One batch of cheese takes 1-3 gallons of milk which takes over a week to accumulate, so I freeze it in the meantime to keep it fresh. I keep a pint jar in the fridge for drinking and putting in my coffee. Its particularly nice with a bit of coffee liqueur. 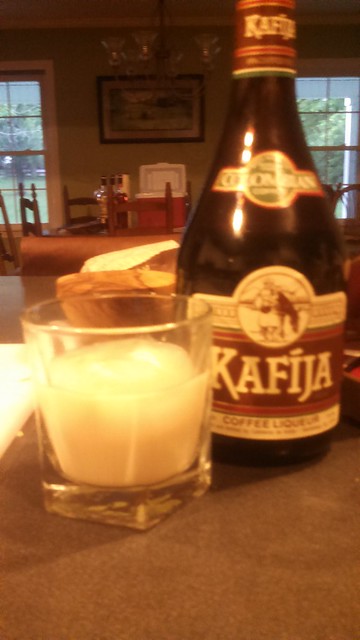 I’ve made three batches of chevre so far. I’ve tried different herbs, and plain, and so far my favorite flavoring is salt, garlic powder and fresh dill. 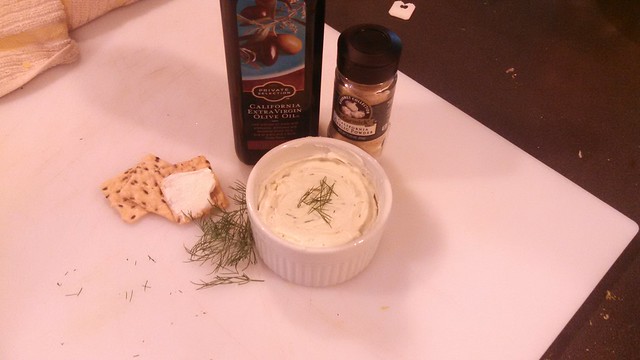 After making cheese there is a bunch of whey left over which you can use for baking and other things but I’ve been giving it to Schnitzel. Right now she is completely on pasture with the rest of the flock and we are worried that she isn’t getting enough protein. The whey is packed with protein so it should make up for any deficiency in her vegetarian diet. 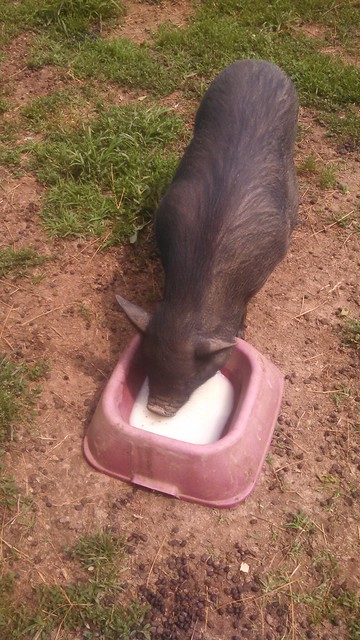 I used some of the fresh milk to make fudge last night. The flavor was great but it didn’t set up properly. I don’t think I got it hot enough. I blame my dad because he called me while I was in the middle of heating it and distracted me. 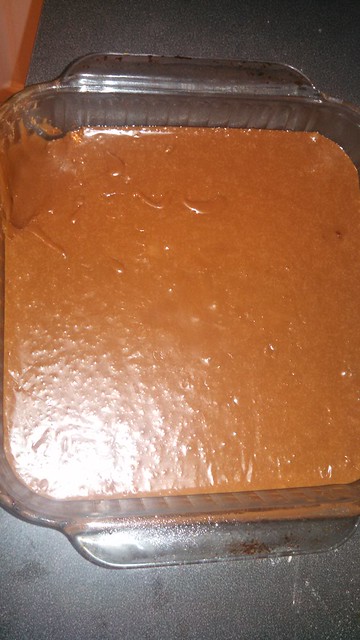 I also experimented with blending plain chevre with melted chocolate chips (50/50 ratio) to make truffle filling. Again, its a little softer than I’d prefer. Maybe because my chevre tends to be on the soft side? I’m not sure if it’ll work for truffles because it gets very soft at room temperature.

The garden has just started producing edibles. We picked our first cucumbers and had them on bread with chevre and dill. It looks like we should have green beans within a week. 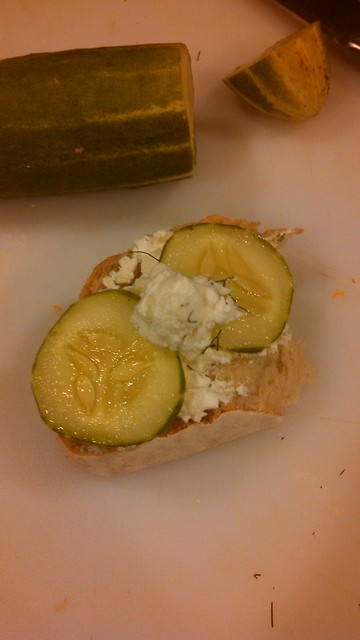 The chamomile has been in bloom since spring and every several days I harvest it, dry the flowers and save them for tea. 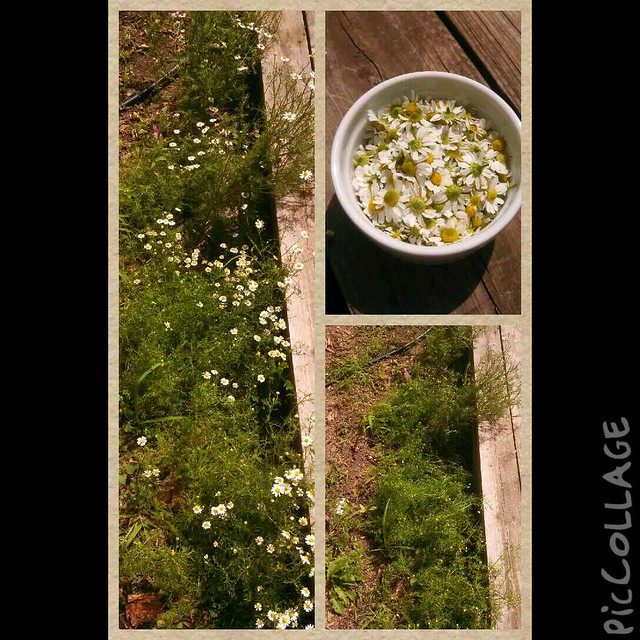 Its been hot and muggy. The animals deal with the heat by napping in the shade as much as possible. Grace likes to stand in her pool. She makes Cinderella watch. 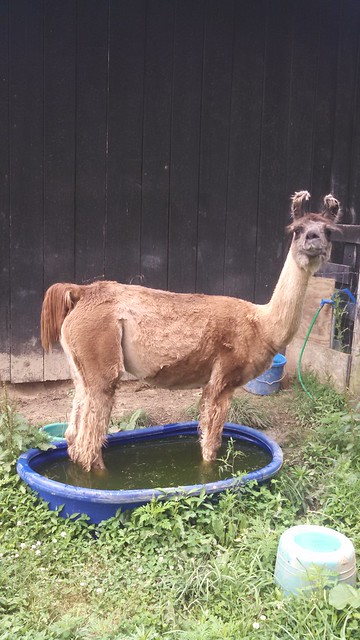 Our one remaining bee hive finally died. It had been weak all spring and so we were not surprised when eventually we stopped seeing activity and opened it up to find it empty. Right now a wild bee colony is cleaning it out and stealing all the honey. There wasn’t enough honey to make it worth the effort of collecting for us so we are happy that it isn’t going to waste. We don’t know why the hive died. Perhaps it was the unusually cold, harsh winter. 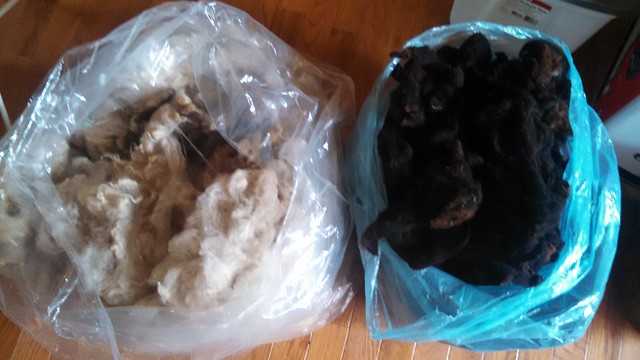 I sent about 20lbs of wool off to a mill today to be processed into roving. I sent a bag each of Francine, Jeb and Kaylee/Kelly so I’ll get back roving in oatmeal, brown and black. Once its been processed it can be spun as is or dyed. I’ve been processing it into roving by hand at home but have more fleeces than I have free time. Having it commercially processed also gives a better quality roving than I can produce by hand and will be ideal for selling. Its about time for these critters to start earning their keep!

p.s. most, if not all, of these photos were originally shared on my Facebook page along with many others. If you like getting daily updates on farm life, please follow me here. I post much more regularly on Facebook than I do here.

One thought on “Weekend Farm Report”